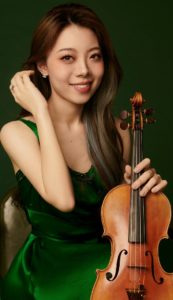 In 2016, she held Chamber concerts of famous artists in many places in the United States, which were praised by experts at home and abroad. In 2020, he was invited to perform award-winning concerts in Barcelona, Spain, Weil Recital Hall, Carnegie Hall, USA. In 2021, she  participated in the founding ceremony concert of the Tango Art Research and Practice Center of the Central Conservatory of Music and the New Year World Concert of the Beijing Winter Olympic Village with the Hehe Chamber Orchestra. In March 2022, she successfully cooperated with the Symphony Orchestra of the Central Conservatory of Music. In April, she and the ‘Hehe’ Chamber Orchestra successfully held several chamber music concerts in the National Center for the Performing Arts.

Professor Jo Cole of the Royal College of Music once spoke highly of Han Xiang as a performer endowed with both virtuosity and high musical accomplishment. And accepted the British media interview, in the domestic and foreign major media release.