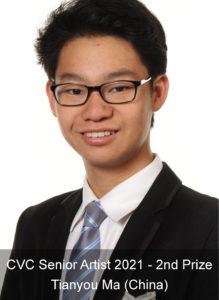 Chinese violinist, Tianyou Ma (20yrs) has been a single study student at the Elder Conservatoire of Music since 2010, where he was awarded a full scholarship to study with Keith Crellin from 2010-2013. Since 2014, Tianyou was awarded full scholarship at The Yehudi Menuhin School and studied violin with Diana Galvydyte. He was also awarded a full scholarship from the Music and Dance Scheme in the U.K. from 2016 – 2019. He started undergraduate study with a full tuition scholarship at the Curtis Institute of Music in Philadelphia in August of 2019, studying with Pamela Frank and Shmuel Ashkenasi.