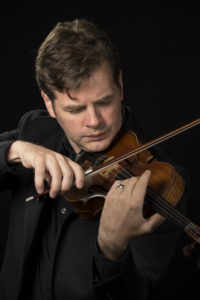 Robert Simonds is an American born violinist, having a multifaceted career as an orchestral player, chamber musician, and solo recitalist. Rob is the principal second violinist of the Rochester Philharmonic Orchestra and member of the Cabrillo Festival of Contemporary Music in Santa Cruz, CA.

Interested in contemporary music for as long as he can remember, Rob has performed unaccompanied recitals across the country that weave together new works by living composers with folk and Baroque music. Arts San Francisco said of a recent solo performance that “He’s a confident and amazingly gifted performer biting off works of immense complexity”. And small ensemble collaborations with diverse artists such as Rhiannon Giddens, Rachel Grimes, Lizzie No, Joe Pug, and Ben Sollee have been especially rewarding.
Rob began his orchestral career with a position in the Richmond Symphony Orchestra, followed by a formative tenure in The Phoenix Symphony. For seven seasons, he was principal second violinist of the Louisville Orchestra, during which he was also appeared as soloist and the orchestra recorded two albums for Decca Gold.
Born and raised in Massachusetts, Rob began the violin at a young age, first learning from his grandmother. A graduate of the University of Cincinnati College-Conservatory of Music, he earned two degrees in violin performance.
We use cookies on our website to give you the most relevant experience by remembering your preferences and repeat visits. By clicking “Accept All”, you consent to the use of ALL the cookies. However, you may visit "Cookie Settings" to provide a controlled consent.
Cookie SettingsAccept All
Manage consent