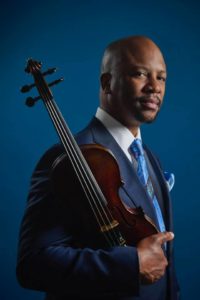 Dr. Quinton Morris enjoys a multifaceted career as a concert violinist, educator, filmmaker and entrepreneur. He performs solo concerti/recitals and chamber music and presents lectures worldwide. He is the founder of Key to Change, a nonprofit with the mission of inspiring underserved youth and students of color through world-class music instruction and supporting their development as self-aware leaders. Key to Change operates two violin and viola studios in South King County, Washington which serve middle and high school students who may not otherwise have access to classical music instruction.

Key to Change was born out of Dr. Morris’s BREAKTHROUGH World Tour, which paired recitals and concerto performances with lectures, master classes and educational outreach in over 25 cities across five continents. The tour also featured Dr. Morris’s short film The BREAKTHROUGH, which premiered at the Seattle Art Museum and the Louvre Museum in Paris, among other distinguished venues worldwide. He directed and starred in the film, which tells a modernized story of the Chevalier de Saint-Georges: a violinist of African origin who, against all odds, rose to become one of the most prolific and forgotten figures of the 18th century. Governor Jay Inslee awarded Dr. Morris the Washington State Governor’s Arts Award for his success with BREAKTHROUGH and the film received the first prize “Diamond Award” at the European Independent Film Award Festival in Paris and the bronze award at the Global Music Awards.

Dr. Morris has received numerous awards including the Puget Sound Business Journal’s “40 Under 40 Award,” Seattle Mayor’s Arts Awards, the Seattle University Provost Award for Outstanding Scholarship and Creative Work, and named a “Mover and Shaper” by Musical America. He is currently the co-chair of the Seattle Arts Commission. He has also presented at American String Teachers Association national conference, Maryborough Music Conference (Australia), the United State Consulate in Australia, the University of Paris-Dauphine School of Business, National Normal Taiwan University, among many others.

Dr. Morris is a Renton native and earned his Doctor of Musical Arts degree from the University of Texas at Austin. He joined the Seattle University faculty in 2007 as Director of Chamber and Instrumental Music and Associate Professor of Violin and Chamber Music. He is the first tenured music professor at Seattle University in over 35 years and the second living African-American violinist in United States history to receive such a distinction. Currently, he is also the inaugural Artist-Scholar in Residence at Classical King FM radio. In his spare time, he enjoys cooking, reading, working out, spending time with his family and rooting for the New England Patriots.