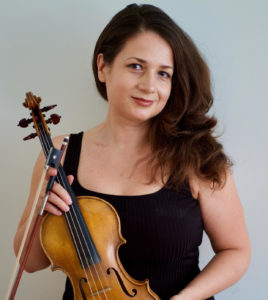 Dr Orieta Dado is a violinist with a rich international career of solo, chamber music, orchestra, pedagogy, and a multicultural approach to Music and Humanities.

Dr. Dado is a graduate of the University of Cincinnati – College-Conservatory of Music (CCM), where she earned her Doctor of Musical Arts (DMA) with a Cognate in Chamber Music under the guidance of Professor Kurt Sassmannshaus, Piotr Milevsky, Dorothy Delay, and the Tokyo Quartet. Currently she is the Co-Principal 2nd Violin of Munich Symphony Orchestra in Germany, where she performs regularly at Herkulesaal, Printzregentheater, and tours extensively in Europe, Asia, and the USA.

Winner of multiple awards, like Starling International Artist in Cincinnati, Naftzger Grand Prize in Wichita, Jefferson Artist in Colorado, and Stavanger Solo competition in Norway, she has appeared as a soloist with orchestras on both continents, such as the Albanian Radio Orchestra, Aspen Young Artist Orchestra, Albanian Philharmonic, Hays Symphony -a concert broadcasted live on Kansas Radio- and Cincinnati Conservatory orchestra.

At 14 years old she performed Mozart Violin Concerto in A major with the Albanian Philharmonic and later became the concertmaster of Albanian Virtuosi, a prominent Youth Soloist-and-Chamber orchestra touring all over Europe.

In 2004 she returned home to perform Beethoven Triple Concerto with other prominent musicians and the Albanian Radio Orchestra in the country’s foremost venue, Teatri i Operas dhe Baletit. This event was broadcasted on several TV and Radio channels, and she gave an exclusive 45 minute interview and profile on “Pegasus”- a distinguished cultural series at the time.

Her orchestra career extends to both continents, collaborating with artists like Pavarotti, Domingo, Perlman, Yo-Yo Ma, Flemming, DiDonato, conductors like Levine, Jarvi, Schüller, and Baroque specialists like Biondi and Göbel. She has toured in the USA, Europe, and Asia and performed in the Concertgebouw, Köln Philharmonie, Washington D.C., Beijing National Center, and Seoul Centre for the Arts. Her artistic activities have been broadcasted in the NPR of Kansas, Minnesota, Georgia, Kentucky, and in Albanian National channels such as Radio Tirana, TV-Albania, and Top Channel.