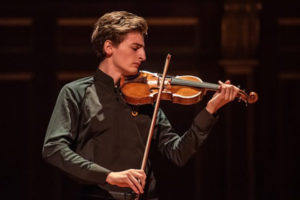 This past summer, Joshua was awarded both Second Place and the Audience Award in the 2015 Cooper International Violin Competition and had the honor of playing the Shostakovich Violin Concerto with the Cleveland Orchestra under the baton of Jahja Ling.  “Had he played from behind a curtain, you wouldn’t have believed that Joshua Brown…was only 15,” wrote Daniel Hathaway for

clevelandclassical.com .  “His interpretation of Dmitri Shostakovich’s first violin concerto was so maturely wrought that it might have come from a seasoned professional.  Brilliantly played and expertly paced, Brown’s performance checked into every emotional corner of [the] work … Brown was spellbinding throughout his entire time on stage.”  Mark Satola in The Plain Dealer described Brown’s performance as “stunning” and “on an Olympian level…Brown played with such assurance that it was easy to forget he was a young teenager.”

In December, Joshua received more awards than any other participant at the 2015 IX International Tchaikovsky Competition for Young Musicians held in Novosibirsk, Russia, taking home the Audience Award, Honorable Mention, the Academy of Arts Golden Medal, and the Siberian Academy of Arts Talent Award.  He also had the honor of performing in the First Prize Winners Gala Concert and being formally invited to perform with the Novosibirsk Symphony Orchestra during its 2016-17 season.  Joshua has had the privilege of taking lessons and master classes with teachers such as Pinchas Zukerman, Rachel Barton Pine, and Ilya Kaler,among others, and he plays on a 1910 Vincenzo Postiglione violin generously on loan to him by the Virtu Foundation.
We use cookies on our website to give you the most relevant experience by remembering your preferences and repeat visits. By clicking “Accept All”, you consent to the use of ALL the cookies. However, you may visit "Cookie Settings" to provide a controlled consent.
Cookie SettingsAccept All
Manage consent