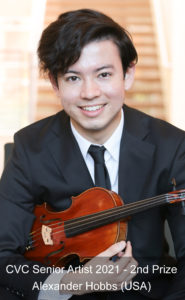 American violinist, Alexander Hobbs made his Carnegie Hall recital debut in summer 2019, followed by his String Quartet performance the following year with Noah Bendix-Balgley, the first concertmaster of the Berlin Philharmonic. He is the prizewinner of numerous competitions, as well as an active concert performer.

Alexander has appeared as soloist with multiple orchestras including performances with the Japan Classical Orchestra, the NHK Philharmonic Orchestra Ensemble, and the Japan String Teachers Association Orchestra.

Alexander has also earned the honor of serving as concertmaster for a performance of the Tokyo Philharmonic Orchestra, under the direction of the conductor Myung-Whun Chung. In addition, he has served as concertmaster of Toho Gakuen Academy Orchestra and YMF Debut Chamber Orchestra. Other conductors whom Alexander has worked with include Valery Gergiev, Esa-Pekka Salonen, Ludovic Morlot, Matthias Pintscher, Hans Graff, Paolo Bortolameolli, Edo de Waart, Hugh Wolff, Felix Mildenberger, James Conlon, Robert Spano.

Other than Carnegie Hall, Alexander has been fortunate to perform at beautiful venues such as Suntory Hall, Kioi Hall and Tokyo Opera City in Tokyo, Japan, Walt Disney Hall in Los Angeles, Elbphilharmonie in Hamburg, Germany, Teatro Olimpico in Vicenza, Italy, etc.

At the age of three, Alexander enrolled in the Toho School of Music for children where he commenced his formal violin studies at the age of five, under the tutelage of Asako Iwasawa. Alexander received his Bachelor’s degree from the Colburn Conservatory of Music, where he had studied with Robert Lipsett. He currently is in his Masters program at Mozarteum University Salzburg, where he studies with Pierre Amoyal.